Some three and a half hours from Jerusalem in a leafy glade on Mount Koressos (the Turkish name translates as Mount Nightengale) lies the House of Mother Mary (Meryemana), a unique shrine venerated by Catholics and Muslims alike. Located near the ancient city of Ephesus, legend has it that Mary, the mother of Jesus, and the apostle John lived here after they fled the persecutions of the Romans in Jerusalem.

The Mother Mary House was located only relatively recently, following visions by a generally bedridden Augustinian nun in Dülmen Germany. Apparently Anne Catherine Emmerich’s descriptions were accurate enough for French priest Abbé Gouyet to uncover, in 1881, a crumbling dwelling house where Sr Catherine said it would be. In 1891 priests from Izmir “re-discovered” the site. But the locals had been going there for centuries, venerating it as a holy place for both Christianity and Islam.

While the Ephesus story (dating from the fourth century in Christian literature) is at odds with the long-held belief that the mother of Jesus died at the site of what is now the Dormition Abbey in Jerusalem, it appears that Pope Leo XIII was a supporter of the Ephesus story; he visited the place in 1896, and apparently bestowed special privileges to those making a pilgrimage there.

The legend cannot, of course, be proved or disproved. However, there is strong support for John’s presence at Ephesus, and the sad ruins of what was a magnificent church (built on the hill of Ayasoluk by none other than Justinian) in nearby Selçuk reputedly house his tomb (according to second-century sources Polycrates and Irenaeus).

On the day we visited Mother Mary House, there were busloads of tourists queueing to enter the small chapel, drink or collect water from the holy well, or simply light a candle and say a prayer. Nonetheless, it was a tranquil place, and the prayers of centuries doubtless cast a spirit of peace over us. As we left this holy place and drove to Ephesus itself, I was struck by how close Turkey was to the beginnings of Christianity. If indeed John and Mary made the journey to Ephesus and set up home there, I wondered briefly how they made a living while he was writing his Gospel. And finally, I thought about the bed-ridden German nun who knew exactly where this place was. “There are more things in heaven and on earth …” as Hamlet wisely put it.

Ephesus must have been some city in its heyday. From its earliest beginnings in the tenth century BC, right up to its abandonment around the fifteenth century AD, it was coveted, fought over, conquered, sacked, vandalised, and rebuilt by many, including Ionians, Commerians, Lydians, Persians, Spartans, Syrians, Romans, Goths, and none other than Alexander the Great who liberated the city from a tyrant in 334 BC. The Lydian King Croesus — he of much gold – also had a part of play in the building of the city, notably the Temple of Artemis (of which only one column remains today).

One of my favourite images of this ancient city of marble streets is the communal men’s loos on Curetes Street. Running water made this a not-so-stinky place, and with seats placed close to each other, no doubt a lot of gossip and information was passed from one to the other as these cosmopolitan citizens went about their daily business.

Another building that gave me a sore neck was the magnificent library of Celsus. Built by a son in memory of his father (Roman Senator Celsus Polemeanus), it held up to 15,000 scrolls – a modest rival to the great library at Alexandria. A tour guide told us that there was an underground passage between the library and the nearby brothel. I can find no confirmation of this, but can imagine a John Cleese-type gent telling his wife he was off to the library to catch up on some light reading dear! Given that Ephesus was a bustling port city and the brothel was likely to be a place of much activity, I wondered how the brothel workers had protected themselves against pregnancy and venereal diseases, the age-old hazards of the job. 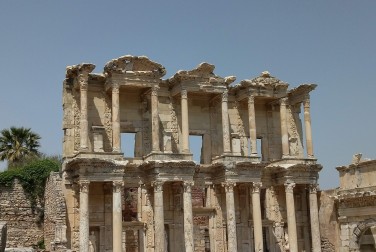 The library of Celsus

In contrast to the sex workers, four elegant female figures guard the entrance to the library: Sophia (wisdom), Episteme (knowledge), Ennoia (intelligence) and Arete (virtue). Unfortunately these are copies because the originals were hauled off to Vienna by Austrian archeologists in the nineteenth century. Ravaged by the Goths in 262/3 AD (later to be substantially re-built by Constantine), and demolished by many earthquakes, the library, like most buildings of ancient Ephesus, eventually stopped trying and simply crumbled away. What did happen to all those scrolls?

Christianity took an early hold in Ephesus after the visit of Saint Paul, although it was a tough task battling the centuries-old worship of Artemis. He almost started a riot after a silversmith named Demetrius complained that Paul would be the cause of their loss of income and damage to the reputation of the goddess Artemis (New Testament, Acts of the Apostles 19). But given its rocky start, Christianity flourished in the region, and the Patriarch of Constantinople was a significant figure in Christian circles in the centuries to come. The place also appears to have been a hotbed of theological activity: the Christian bishops held the third ecumenical council at Ephesus in 431, a meeting full of doctrinal shenanigans and theological intrigue.

In geographical terms, however, it would appear that Ephesus was doomed. Constant earthquakes – which kept the stonemasons busy for centuries – coupled with the silting up of the harbour, had serious economic consequences for the city. By the time of the crusades it was barely a village, and by the fifteenth century, its inhabitants had grown weary, even the stonemasons, and simply upped sticks and moved on. European archeologists in the nineteenth century – keen to unearth the romantic roots of Greek and Roman civilization – did much to excavate parts of the city, but they removed many artefacts that should have been left where they were found. The British Museum has more of the Temple of Artemis than currently remains in Turkey!

We really enjoyed our tour around this most ancient of cities and were stunned by the obvious wealth of what it must have been in the Byzantine period. It makes you think: in the days when the inhabitants of Dublin and Belfast were just out of the cave, living in mud and wooden huts while eking out a living in unsavoury hygiene conditions, the citizens of Ephesus had running water – some even had indoor loos – spacious bathing facilities, wide, oil-lit streets paved with shinning marble, a library and a medical school, alongside a theatre that seated 25,000. And yet … the city just crumpled away. As a fascinating place to visit, I give it full marks, pipping Hierapolis and Pamukkale to the post by a good few lengths. I really do recommend a trip away from the coast for those willing to embark on the longish road trip.