I have been working on the Carabine family tree of late. I’m back to 1837 but can’t get very specific details before that. My great-great-great-great-grandfather died in 1900 having been a carter (horse and cart man) for the better part of his sixty-year working life. So when I found a video of Castle Junction in Belfast taken by the Lumière brothers in 1897, I was excited, thinking I might catch a glimpse of the man I have thought so much about. I may well have done, but I couldn’t really make out features on individual faces. I was, however, struck by the number of horses (and excrement) in the city at the time and wondered where they lived. More importantly, what happened to them once the electric tram made its appearance on the city’s roads? According to my father, his grandfather Thomas Carabine (a carpenter by trade) had drays so he might have had a side business carting stuff around the city. I suppose the horses simply died of old age and replacements were not needed. It put in mind the number of horses used during the first world war: apparently eight million horses and countless donkeys and mules died in those mad times.

Well one thing invariably leads to another on the Internet, and right below the YouTube listings of Old Belfast films was a series of Titanic-related clips. I haven’t been able to take myself away from those since, and am truly fascinated by the amount of minutiae we have garnered about this mighty tragedy.

One detail that captivated my interest concerned the nine (or twelve, depending on which account you read) dogs on board during the ship’s maiden voyage. Apparently only first-class passengers were allowed to travel with pets and some did indeed take their dogs, but there were roosters, hens, and possibly canaries on board as well!

This photograph, supposedly (there is doubt) taken by the famous Jesuit photographer Fr Browne shows three of them. An interesting aside about Fr Browne is that his Superior would not allow him to continue the voyage to New York and ordered him off the boat. Some wag is said to have later remarked that it may have been the first time holy obedience saved a life! 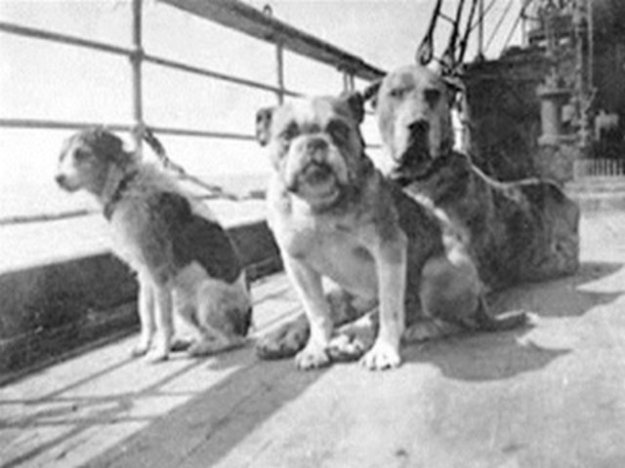 The Great Dane is the one I am going to tell you about. While there is still doubt as to the truth of the whole story (read more here), and we do not have a record of the dog’s name, we think the owner was a Ms Ann Elizabeth Isham who boarded the ship at Cherbourg. She was, according to surviving accounts, devoted to her pooch and visited F Deck every day for walkies and canine affection. But the sad part occurs when the Titanic struck the iceberg and began its slow sink into the icy waters of the Atlantic. As a first-class passenger, Ms Isham was given a place on a lifeboat. But, according to legend, when told that her dog could not also find a seat to safety, promptly got out of the boat to be with her beloved pooch. A few days later a rescue boat found the unfortunate woman, still holding on to her dog, but both of them had perished. Ms Isham was one of only four women from first-class who didn’t make it to safety. Here she is.

But the story got me thinking. What or who would make me get out of that boat if they were not going too? Husband? Children? Yes, certainly, but for many people their canine companions are dependents who are loved as much as their human children. I am a bit of a softie where dogs are concerned, so I’m almost sure I wouldn’t leave my current wee honey on deck while I disappeared in my lifeboat. For some, that is a ridiculous notion, but for others it makes sense because companionship is not species specific. Just saying.